Skip to content
Siana Bangura is a writer, producer, performer and community organiser hailing from South East London, now living, working, and creating between London and the West Midlands. 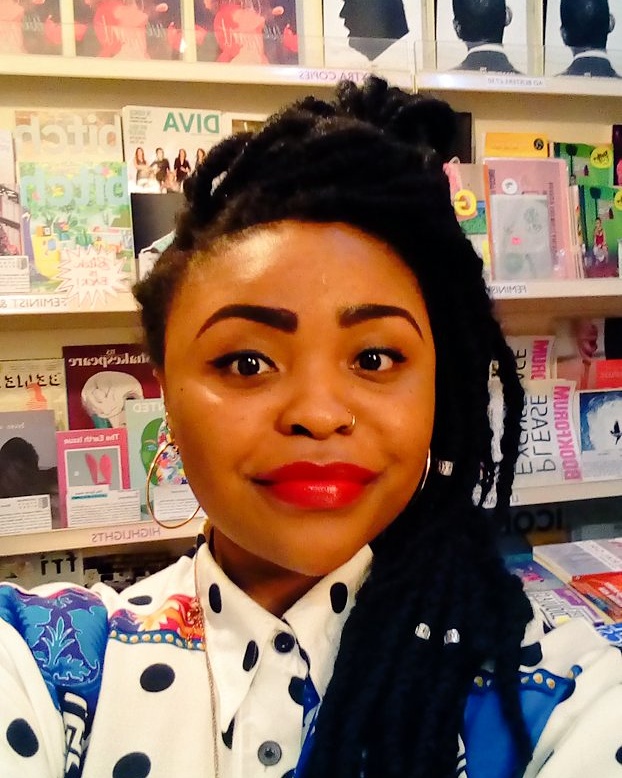 Siana is the founder and former editor of Black British Feminist platform, No Fly on the WALL; she is the author of poetry collection, ‘Elephant’; and the producer of ‘1500 & Counting’, a documentary film investigating deaths in custody and police brutality in the UK. Siana works and campaigns on issues of race, class, and gender and their intersections and is currently working on projects focusing on climate change, the arms trade, and state violence.
Siana was an artist in residence at the Birmingham Rep Theatre throughout 2019, working on her debut play, ‘Layila!’, which was subsequently turned into an audio offering 2020 – listen to ‘Layila!’, the audio edition by clicking here. In 2017, Siana was the inaugural poet-in-residence at Housmans, one of London’s longest-running radical independent bookshops.
Siana is also a workshop facilitator, public speaking trainer, social commentator and independent publisher at Liberated Press. Her work has been featured in  mainstream and alternative publications such as The Guardian, The Metro, Evening Standard, Black Ballad, Consented, Green European Journal, The Fader, and Dazed. Her past television appearances include the BBC, Channel 4, Sky TV and ITV and Jamelia’s ‘The Table’.
Siana has worked with organisations such as Groundwork UK; institutions and universities such as Oxford and Cambridge; companies and organisations such as Great Men UK; and theatres such as Gate Theatre, tiata fahodzi, and Belgrade as a consultant, facilitator, and advisor, often focusing on working with marginalised groups such as young people, Black women, and people of colour.

Siana has been recognised by MOBO, The Bookseller, VICE, Dazed, Elle, NU People Magazine, Hustle and Heels, The Voice, True Africa, Buzzfeed, and the BBC, among others, for her work, her powerful voice, conviction, and commitment to working towards meaningful inclusivity and positive change in Britain and beyond. She was nominated for the 2016 Nu People x Hustle and Heels Inspire Award and holds a History degree from the University of Cambridge. Siana is an international public speaker, performing and presenting papers and presentations across the world, including in Germany, Portugal, Finland and Brazil. She has delivered two TEDx talks – at the University of St. Andrews in 2017 and at the final TEDxEuston Salon in 2019 – and in 2019, co-curated TEDxYouth@Brum conference at Birmingham’s Hippodrome, which included speakers such as Jamelia.

Across her vast portfolio of work, Siana’s mission is to help move marginalised voices from the margins, to the centre.

‘A powerful emerging voice on London’s poetry circuit… Bangura is making a path for writers who don’t want to compromise their creativity, championing a DIY path to getting work out there for people to read… Bangura’s Elephant is semi-autobiographical, covering the politics swirling around black womanhood, from childhood experiences of colourism to adult encounters with direct racial hatred, and the memory of immigration to London from Sierra Leone. Bangura explains the conscious link between forging a DIY route, and the experience of minorities navigating the traditionally white space of literary publishing.’ – Anna DeWolf, Dazed

‘These breath-taking, astute, fierce, resilient, considered sisters make me really excited about what the future for women of colour in the UK could look like.

‘[Siana’s] candid account of the incident on social media helped uncover the underbelly of the UK racism which is often swept under the ‘illusion of inclusion’ carpet. We have to keep telling our stories, to keep our humanity thriving and prevent others from overstepping our boundaries.’ – Simone Bresi-Ando, The Voice, January 2016